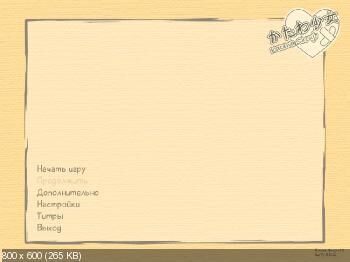 Katawa Shoujo / かたわ 少女 / Girls with disabilities
Year of release: 2012
Release Date: 2012/01/04
Genre: Romance, Adv, Student, Masturbation, Anal Sex, Drama, School, Comedy, Straight
censorship: missing / there is a deletion patch
Developer / Publisher: Four Leaf Studios
Platform: PC / Windows
Type of publication: Original (licensed)
Tabletka: Not required [ 123] Version: 1.3.1
Language of the game (plot): Russian, English
Interface language: Russian, English
Voice language: Unknown / Other
System requirements (minimum): Windows XP, Vista , Android
Processor: Pentium III 900 MHz
RAM: 128 MB
Video Map: Direct3D 8.1 [32 Mb]
HDD Free: 500 MB
Description: Hisao Okay – ordinary high school student andLast year studying in it. Once he finds a letter from an unknown sender in the cabinet and comes to the specified meeting place. The author of the letter turns out to be a girl who loves him, but when talking with her, he loses consciousness. Having woke up in the hospital, he learns that the cause of his fainting is unexpectedly manifested himself a heart disease – arrhythmia. After a long treatment in the hospital from arrhythmia, he is forced to go to school Jamak, where, despite the difficulties, acquires friends and love.
Extras. Information: The game is translated into Russian, translation: Novellae Subs. In the distribution there is a version for android. There is also a passage in the form of a table.
Games page on VNDB – https://vndb.org/v9454431 ATCOMIC SITE – https://www.katawa-shoujo.com/
from 1.0 to 1.3 .one