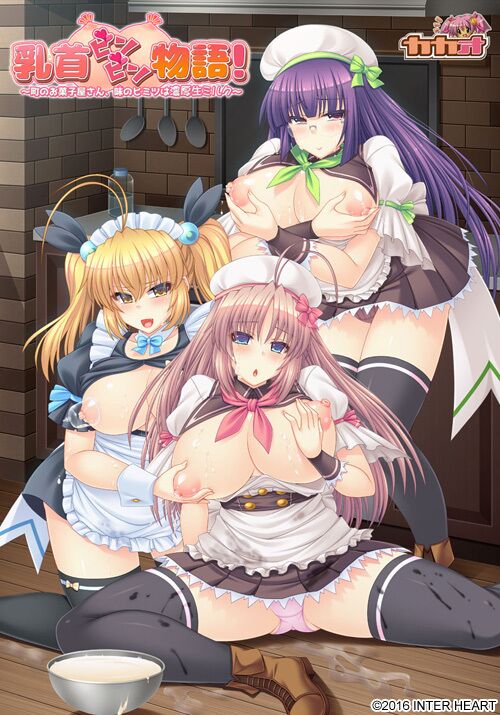 Chikubi Binbin Monogatari! ~ Machi No OKASHIYA-SAN, AJI NO Himitsu Wa Noukou Nama Milk ~
乳首 ビンビン 物語 物語! ~ 町 の お 菓子 や さん さん 味 ヒミツ は 生 生 生! ~
Nipples Confectionery in the town, rich taste of secret fresh milk – year of release: 2017
Release Date: 2017/01/27
Genre: Animation, Mature Woman, Big Tits, Cafe, Harem, Lactation, Group Sex, Ahegao, Bukkake, Cosplay, Oral, Footjob, Blowjob, PAIZURI
Censorship: Yes
Developer / Publisher: CACAO
Platform: PC / Windows
Type of publication: Original (licensed)
Tabletka: Not required
Language of the game: Japanese
Interface Language: Japanese + English
Voice Language: Japanese
System Requirements (Minimum): OS: WinVista / 7/8/10 HDD: 1GB Description: Recently Sweet shop “Hecsenhaus” began to gain big popThe urbanity of the girls.
All products are sweeping from the push literally immediately after opening.
Such information has reached the hero named Ikui Rickmar.
But there was another reason why he became interested in the store … [ 123] There was a wonderful girl in the kitchen apron, which was clearly seen from the showcase.
When Ikuya went, Konomi, which he looked, answered him with a smile.
While being puzzled in conversation mention of The fact that she is a manager, they ate the most popular store products, especially raw pudding.
Ikuya is impressed with the taste of pudding. In addition, the younger sister Konomi, Mitsuna, also ate sweets in front of buyers and made her work with great passion.
Ikuya, talking to Mitsuna, offered to help them with work.
Store popularityIt grows, and there is not enough workforce, because they gladly offered him work on part-time.
Fortunately, his innate skills attracted their mother’s attention to the name of the Oka, and he decided to work as a confectioner!
Now He has the opportunity to work with Konomi without any obstacles, for Ikui it was the first step towards his hidden reasons.
And, one day after he began to work.
Ikuya went to work earlier than usual to To show yourself a condomie in the fight in the kitchen.
And in particular, to see the “secret ingredient of the taste” of raw pudding.
Extras. Information: Getchu
VNDB