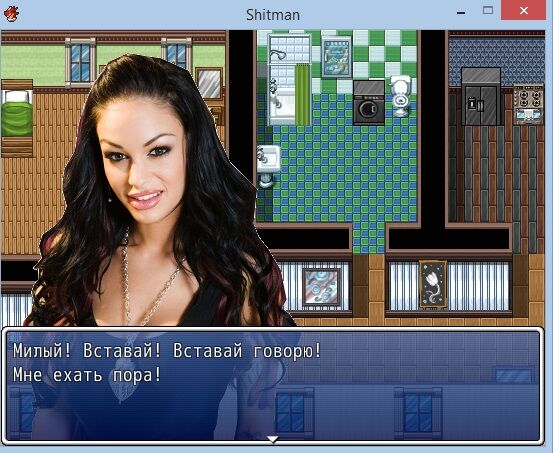 -Schitman / Evil chimpanzee intervention in the peaceful life of the Chukotka capital
Year of release: 2016
Release Date: 2018/05/09
Genre: RPG, Oral Sex, Comedy, Furry
Censorship: None / there Patch for deletion
Developer / Publisher: http://deys-studio.blogspot.ru/
: PC / Windows
Type of publication: in development
Tabletka: Not required
Version: 0.2
Game Language: Russian
Interface Language: Russian
Voice Language: Russian
System Requirements (Minimum): CPU Intel Pentium4 2.0GHz RAM 512MB HDD 254MB RPG TKOOL VX ACE RTP
Description: His father disappeared fifteen years ago, he did not feel it, he was too busy because he was looking for an adventure.
His mother leaves for fees to the Paris region, from that only joyful, less supervision.
and what is noweat a simple guy? But it is to decide!
Extras. Information: The game was made for the Albedo 2016 competition.
All as usual the game is not recommended to people prone to the grammar Nazism. People tolerant, your feelings can be affected. People awaiting porn games, porn.
On still not understandable to me the reason to the Ukrainians (my first game caused such a bodily explosion of emotions that I still have a shit on the door, sho Moskal and racist) [123 ] Of course, Gypsies are not recommended, I hate them and do not hide it.
It is not recommended for those who are too lazy to read. It is not recommended that those who are just turning from the image of real women, and only the big-eyed Tonogi Anime kami will attract their minds, I use the photo.
Additionally, this game I do not recommend children up to 16, I do not recommend that if I do not recommendYou know me, then you know that I watched the children up to 16 to 16, instead of taking children to make children to classmates, let it be meaningful! But here as if about drugs, and I do not like the drug about like Roma. Therefore! Kids! Kids, play better in the first inoccupation, everything is right there, there are about venereal diseases, and about the denthet breasts, as well as a lot of interesting information that will never be useful for you!
Well, so! If one of the above categories of citizens you do not feel, then I probably correctly, I did it for myself!