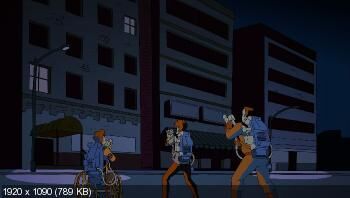 XXXTREME GhostBusters Special Edition
XXXTrem Ghost Hunters (Special Edition) Year of production: 2016
Studio: Zone
Genre: Anal, Oral, Group Sex, Cumshot, Monster
Duration: 00:16 : 02
Censorship: None
Language: English
Subtitles: English, Russians (external)
Description: Kylie Griffin from extreme ghost hunters kidnap the ghosts and are covered with 15 minutes with their ectoplasm.
Skip the scene after the titles!
Add. Information: Animation is timed to the anniversary – a decade of Creativity Zone. Kylie Griffin – the heroine of the first Flash animation ZONE 2005 year.
The plot is based on the 6th episode of the series: “13 selected” (Casting the Runes). In it, the Rifkin fraudster abducts magic runes from the museum, touch to which opensOrtal to another world and obrives the “chosen runes” to the eternal ministry to the death of Kalil. Rifkin uses runes to revenge the offenders, and one of the elects becomes Eduardo. In an alternative world of XXXtreme Ghostbusters Kylie, and not Eduardo, concerns the damned rune.
Creation of Zone Productions are funded by donations. If you have a desire and funds – you can come together several ways to thank the author.
Special edition: Differs from the usual presence of the following • Voice over used song Glenn Frey – Flip City (Ost Ghostbusters 2) [08:25 – 13:20 ]
• Video versions in ‘VHS-style’
• Covers for VHS, which can be printed
• Stickers for VHS, which can be printed
• Both trailers in high quality
• Poster from @polyleisle
• carriedAs well as the animation frames, which were too big to fit on the screen without trimming.
• Wallpapers – 2 pcs.
• Replica of the original font Extreme Ghostbusters from titers. In this hand: the following changes are made • English subtitles Translated into Russian based on the voice acting from the STS
• Fixed a typo in the timing of English subtitles
• Added an external audio track from ordinary edition (without voice acting during the song)
• Special edition bonuses are moved to subdirectory