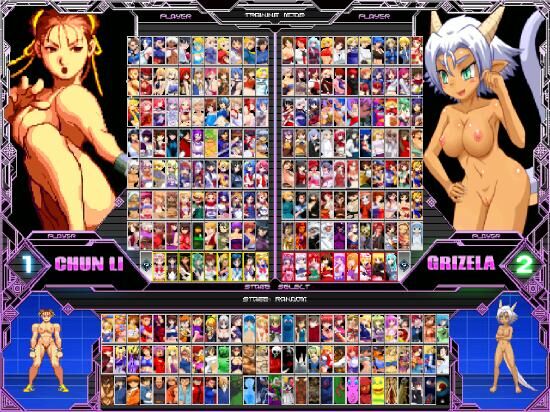 The Queen of Fighters Redux / Queen Fighters Redux
Year of release: 2013
Release Date: 13/08/11
Genre: Fighting, Futanari, Demons, Pregnant, Peeing, Rape, Tentacle, Yuri
Censorship: None / There is a patch to delete
Developer / Publisher: HLOADER
Platform: PC / Windows
Publication Type: Pirate (Unofficial)
Tabletka: Not required
Version: V1.0B [ 123] Game Language: English
Interface Language: English
Voice Language: Japanese
System Requirements (Minimum):
OS: Windows XP / Vista / 7/8 / 8.1 (32bit / 64bit) [ 123] Processor: 2.13 GHz Intel Core2 Duo
RAM: 3 GB RAM
DirectX: Versions 9.0c and higher
Sound card: DirectX 9.0c and higher
Disk space: 21 GB
Description: While I collected my collection of modes for DOA 5: LR I noticed that on PoRnolab no Mugen collection. Therefore, I post my favorite assembly of The Queen of Fighters Redux with 260 fighters and with 260 arenas. As the Mugen is put on the collection in this fighting, present sprites of girls from most of the fighters of which can be fucked. At the top of the character selection menu, there are female characters from Kof, SF, VG and many other fights, and in the bottom of the men’s characters who can fuck them. In the game there are one-on-one battle modes, two two and teams 4 on 4. There is also a survival regime, where you need to combine all the fighters, which is in principle it is impossible because of their quantity. Every girl has his own backdrop on which they fight. Because the fighters too much I decided to remove the system of complexity and now all the fighters are chosen by chance and now you can take away and youFight with a light opponent or with a super complicated who will give you an infinite number of combo. However, if you all won 13 enemies in arcade mode, then you will be shown award in the form of a hentai ending for each character.
Extras. Information:
Chita:
F1 – Kills Player # 2 (whether it is you or your opponent).
F2 – Reduces the life of both players by 1. That is, 1 hit and victory. Use it before you strike.
F3 – completely replenishes the energy (blue bar).
F4 – Restart Round (starts Round again, only round. If there are 1-2 victories, they remain). You can use something to avoid defeat; Press F4 immediately after losing (while the round has not switched).
Space (Space) – completely fills the life, energy and time round.