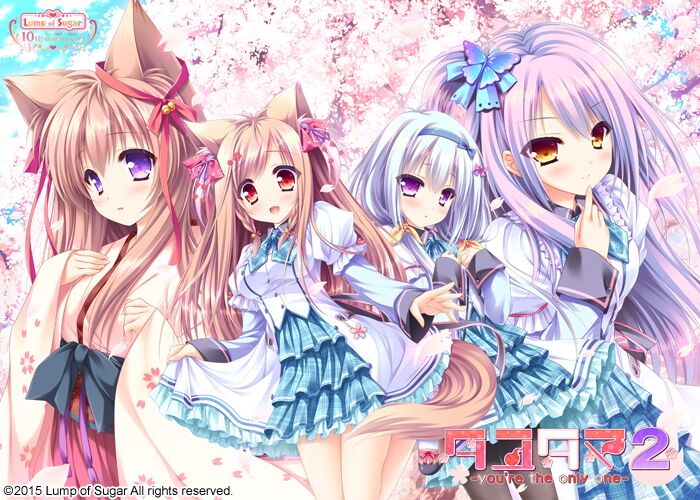 Tayutama 2 -You’re The Only One-
タユタマ 2 -You’re The Only One-
Tautama 2 – Only you are one — year of release: 2016
Release Date: 2016/09/23
Genre: Animation, Big Tits / DFC, Magic, School, Kemonomimi, Fox, Bunny, Vampire, Angel, Fairy, Miko, Goddess, Romance / True Love, Virgin, Harem, Blowjob, PAIZURI
Censorship: yes
Developer / Publisher: Lump of Sugar
Platform: PC / Windows
Type of publication: Original (licensed)
Tabletka: Not required
Language of the game: Japanese
Interface Language: Japanese + English
Voice Language: Japanese
System Requirements (Minimum): OS: WinVista / 7 / 8/10 HDD: 4.10GB Description: 50 years have passed since the release of the Toytai, which were sealed in Ashihara-Chu. People since then recognized their existence and Tayutay also began to strive for life in gArmia with people. The city of Smokati-Chu, where Sora lives, was blessed by the most favorable spiritual energies of the country. As such, he was appointed as a place where people and Tyutayti could coexist, and began to grow rapidly, attracting many people and Tyutayti.
Once sore managed to resolve a small fight between the child and Tyutayti. It is not uncommon to see such cases in this city. Nevertheless, he was surprised when a girl with cute ears on his head appeared before him, claiming that he was who she was looking for. She led him to the shrine Toytay, the temple of Yatimat, and turned to him with flickering innocent eyes.
“I want you to become my husband!”
He could not understand the true intentions of the girl Kohaku, but hearing explanations from her mother of the machine and deeply impressed herTuziam, he agreed to help her realize her purpose of the formation of a “human coexistence society and Toytay” .dop. Information: Getchu
VNDB
Official page