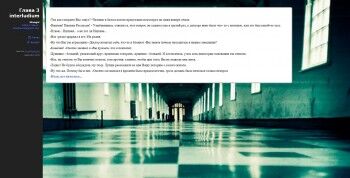 INOCCUPATION3 PROLOG / Dwarf lesbians vs Fantomas 5
Year of release: 2015
Release Date: 2015/12/31
Genre: Adv, RPG, All Sex
Censorship: None / There is a patch for removal [123 ] Developer / Publisher: http: //deys-studio.blogspot.ru/
Platform: PC / Windows
Type of publication: Original (licensed)
Tabletka: Not required
Version: 0.1 ?
Game Language: Russian
Interface Language: Russian
Voice Language: Unknown / Other
System Requirements (Minimum): HDD 52MB, Internet Explorer
Description: It was the usual morning, for a simple Metropolitan student, hangover and temporary memory loss, and this neighbor is mocking, in general, everything is usually bad, but some amount of cash and an unusual key, it is not clear where the trousers took in his pocket after yesterday, a little timeNozzle.
So my name is Ishthan! No, there is not that sochwhan, that the aspina sounds a little different. I am a simple student who is forced to go to many unnecessary lectures to get the wrong diploma and work at the checkout in MacDonalds, and that day the lecture was more unnecessary than usual, black magic, flying on the broom and other Potteriana. But there we were taught to call the families, the knowledge is completely useless, but which was interesting to try out. I tried personally! And here through the funeral to the fog, he appeared to meet my will on the white light! Beautiful like God. Great! Mighty! Scary wise (I often think about him “That’s wisely terrible”)! It was Beck! (In fact, it insists that I describe it like that, I don’t think it, I don’t think it, I like slim girls, nImfoman’s mind warehouse). And he was destined to become my familiar and lead me … Damn where! While in different kind of adventures! Dangerous of course, but profitably and interesting! And such a number of women, as now, in my life was not even in erotic dreams!
Extras. Information: Guys. So I really did not want to lay out “Introduction” here, but in mind the persecution of pirates, I decided to do it, for the people who did not hang out on the albedo and does not attend my blog regularly. So here is the traditional intervadium (well, in the sense for other resources, the traditional, on pornolack, the full and retained versions were usually laid out). There are bugs in this version (I will be glad if you inform them), it is not over, as this is an introduction. And the rest is all the same, many letters, a lot to read. Mistakes, no thenLemonism. Something like that.